The Latest live Aintree Odds are displayed below. Unless the next race up isn’t from Aintree. If that’s the case you can just use the selector to change the racecourse to Aintree. You can also view racing odds from today’s other big races.

Aintree is probably best known as the home of the Grand National, arguably the most famous of horse races in the world today. Although previous to 1839 the race had been run in the neighbouring district of Maghull, it is since the event has been run at Aintree that it gained it its iconic status. With 16 steeplechase fences including the celebrated obstacles of The Chair, Canal Turn and Bechers Brook it is no surprise that the course is widely regarded by professional jockeys as the most difficult of races to complete successfully. With the exception of the water jump all the fences are covered with spruce making the Grand National unique amongst any of the other races in British National Hunt racing.

There are four other races that make use of the National fences. These are the Fox Hunter’ Chase that takes place during the Grand National meeting, the Topham Chase (formerly known as the John Hughes Trophy Chase) as well as the Grand Sefton Handicap Chase and the Becher Handicap Chase that are run in the November meeting. In addition to the National course there is also the smaller Mildmay course contained within. The Mildmay course has its own fences and hurdles that are made from traditional National Hunt materials. In the past the Mildmay and Grand National used to share the water jump, although the Mildmay now no longer jumps the water. 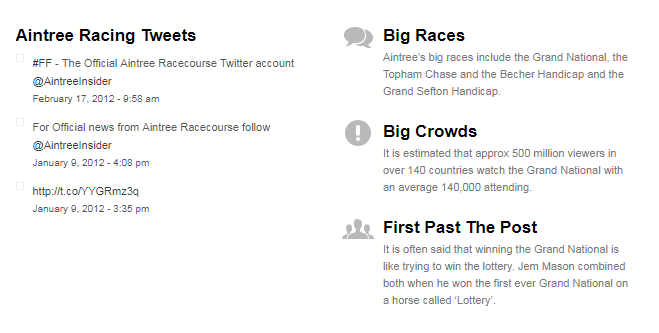 You know horses are smarter than people. You never heard of a horse going broke betting on people. ~ Will Rogers

HorseRacingOdds.me.uk is the easy way to find odds on all of today’s major races. The odds displayed on the site are updated every minute allowing you to spot the big market movers and find horses with the best odds…
Read More